There’s a lot to love about the trip to Amedee Island on the Mary D. Swimming with resident green turtles is a major highlight in a totally relaxing day.

But I just couldn’t go past the snakes – well, without nearly stepping on one.

I’d just taken some photos of the awesome lighthouse, rising up in the perfect light against postcard cloud formations. Turning to catch up to EB, I only just caught sight of something slithery at my feet…

It’s not like you can miss something this dramatic. This black and rust striped Tricot rayé (Striped sea snake) and several snakey-mates are curled up along the pathway and very close to my feet. Nearby, there are blue and black-striped ones.

These gorgeous sea snakes are more venomous than cobras but totally chillaxed! Which is pretty lucky considering I am totally distracted by nature, and tend to not pay attention to where I put my feet!

Later, walking along the beach, a gorgeous specimen slithers past on its way to a shady spot among the rocks… 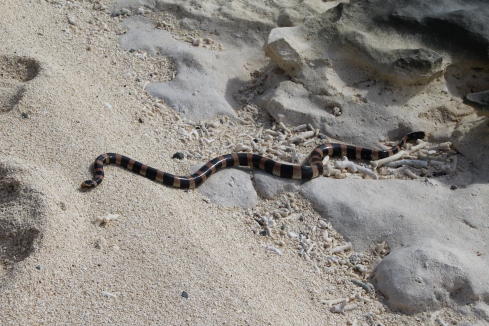 These shy, reclusive creatures still have lungs, so they come onto land to hang about and digest their food (usually fish and eels), then head back into the sea to hunt at night.

Fascinated as we were with them, there is so much to do here – a glass bottom boat, a trip out to the reef, snorkelling, swimming, island fare and entertainment, or just wandering around this peaceful island… 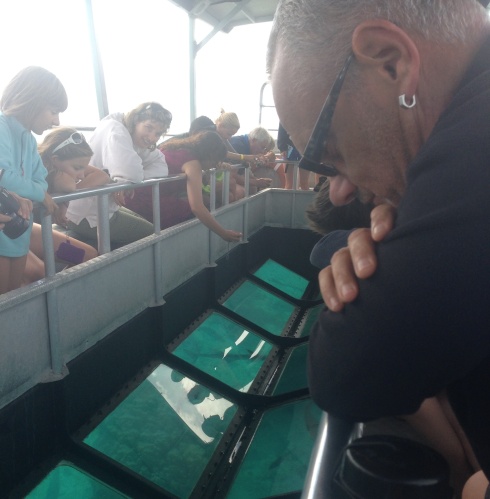 But seriously, those snakes… 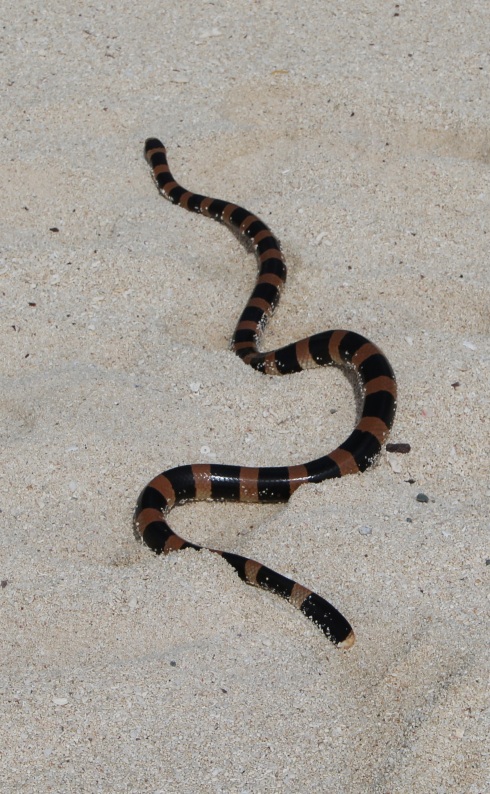 Hands up if, like me, one of your earliest career choices was Marine Biologist… Let’s take a trip back to the future in New Caledonia, where fascinating marine life thrives in a pristine environment… 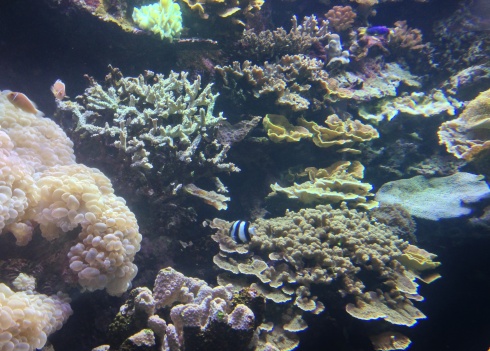 New Caledonian is surrounded by a barrier reef, the second largest in the world after Australia’s Great Barrier Reef. It’s created a perfect environment for marine life to survive and thrive.

I usually avoid stats like the plague, but these are pretty impressive:

And that’s not all… There are major nesting sites here for marine turtles, as well as breeding areas for dugong, humpback whales and seabirds.

Of course, the best way to see it is diving or snorkelling. But you can get up close and personal with this mindblowing diversity, without getting your feet wet, at the Aquarium des Lagons… 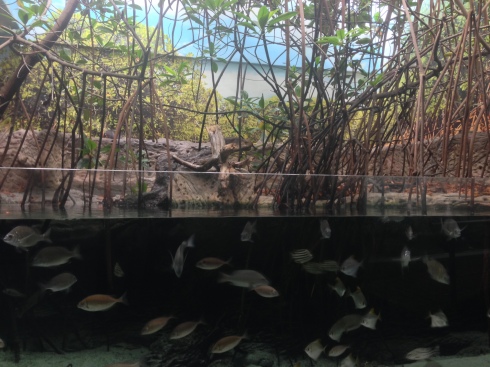 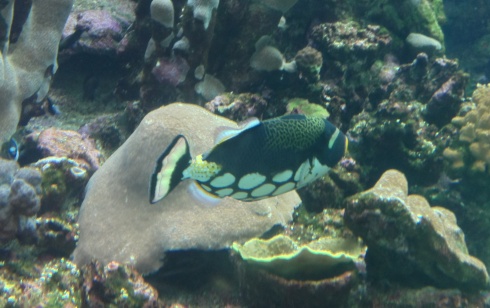 There are 150 types of coral in the New Caledonia lagoon…some that glows in the dark!

I felt like a kid hanging over the re-created rock pools, full of all sorts of marine wonders… 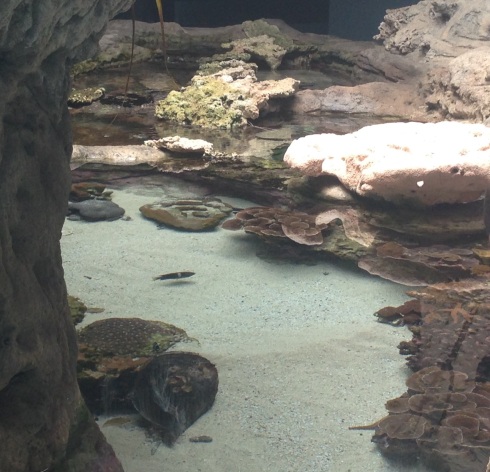 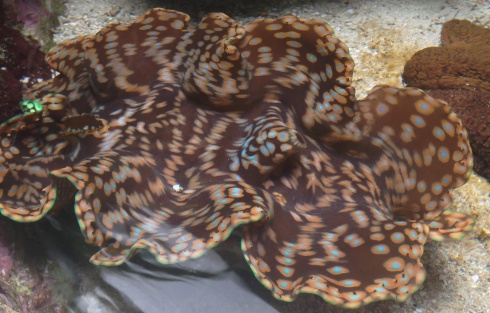 No doubt I also looked like a kid with my face pressed against the glass of the huge aquariums, pretending I was back scuba diving – something I haven’t done for at least 20 years.

Pétanque anyone? Hanging out in Nouvelle Calédonie

Did someone mention winter? Nouvelle Calédonie has turned on the chill and brought in the clouds especially for us. But who’s complaining, when work is a few thousand kilometres away…

…cloudy and chilly the next (but you just have to walk faster!)

On weekdays at this time of the year, it looks abandoned and a little tired here – a bit like a nightclub strip in the harsh light of day.

Yes, there are signs of life as the cleanup begins for the start of the tourist season in September. But no-one is in a hurry.

It will get done when it’s done. There’s no real drive to lose yourself in busy-ness and you’ve gotta love that!

…and those two-hour lunch breaks, ahhhh. The perfect time to do a few laps of the bay, or keep it low key with a game of pétanque, the French version of boules.

The aim is to throw hollow metal balls as close as possible to a small wooden ball called a cochonnet (‘pig’). Did I say low key? This is intense stuff and these guys have all the style…

It’s a little confronting to see so many of the Pacific Islanders hanging out in the street, in parks, under trees. We asked a local if unemployment was a problem here, but she just smiled.

“People think they’re sitting around with no work or money, getting depressed,” she said. “But it’s not like that here. They don’t have ‘nothing to do’, it’s just their culture to be relaxed and happy.

“They don’t want a lot – they have what they need. They’d rather hang out with friends and family. It’s who they are.” 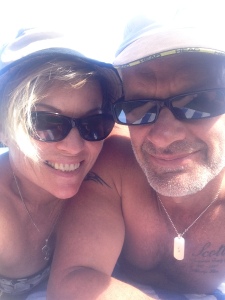 Some argue that there’s a ‘welfare culture’ side to it, but I like that they don’t feel the need to accumulate wealth or ‘stuff’.

That they prioritise family and the group. That having a laugh and a chat is way more important than having the right house or car…

So we did a bit of hanging-out these holidays – something new for us. By the end of the week, we got the point.

It’s okay not to be always on the go. In fact, it’s pretty fabulous really.

Could this be a new way of life? I’ll let you know when we’re back home…

Meanwhile, I must get us a pétanque set. Just sayin’.

Switching to island time… in Noumea

Switch your mental clock to island time and your language to French… you are in Nouvelle Caledonie, where the pace is easy, the weather is (usually) warm, and the locals are forgiving of your dodgy execution of their language. 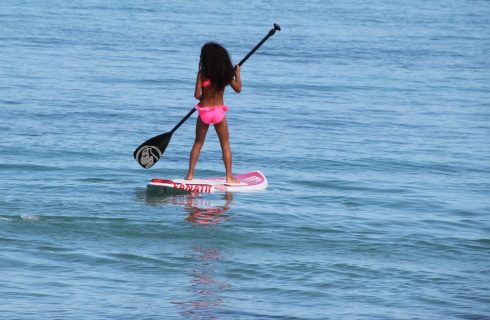 It’s winter here, although on our first day you wouldn’t pick it. The weather forecast is looking good for our week here, so we head off à pied along the waterfront to get our bearings.

Of course, this takes most of the day. Not because we’re directionally challenged but because (have I ever mentioned this?) EB has no off-button.

At least there are irresistible cafés and bars along the way… and this time I remember not to order milk ‘on the coast‘ with my espresso!

It’s hot, the beach at the Baie des Citrons is full of people soaking up the sun and relaxing in the postcard azure sea, and there is plenty of action out on the bay at Anse Vata near our hotel.

But there is wind for kite surfing and sailboarding.

And stretches of ocean you just want to sink into. Or paddle on. Or play in. Or do some relaxed ocean swimming. There are at least ten swimmers stroking back and forth across the Baie des Citrons.

If you’re not exhausted yet, there is an underwater world to explore and some island hopping to do. But that’s another story…