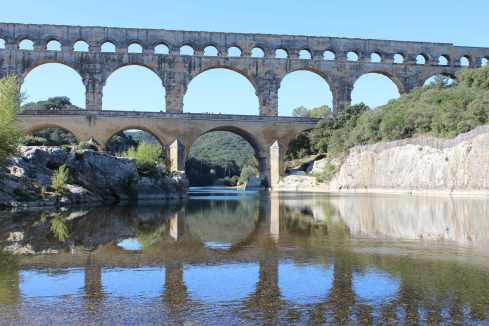 In Roman times, water was wealth. Running water in the city was one thing, but having it in your house instantly put you a cut above the rest.

Enter Pont du Gard. At an impressive 48.77 metres, it was the highest aqueduct bridge in the Roman world.

This is the best-preserved section of an incredible aqueduct system that carried about 20,000 cubic metres of fresh spring water a day, over and around hills and across gullies and rivers, from an aquifer near Uzès to the then-Roman city of Nîmes. Did someone say ‘water restrictions’?

The aqueduct itself is a real feat of engineering, with a fall of only 17 metres across its entire 50-kilometre length.

And looking up at those arches, it’s hard not to be overwhelmed by the huge stones cut and placed with such precision that they could outlast civilisations. Even ours…

Going through the museum at the Pont du Gard site and seeing how it was done ‘back in the day’ is a head-spin (not to mention the museum itself).

Today, Pont du Gard stands as a testament to the legendary Roman determination and ingenuity. It also shows the value they put on having access to fresh water. And a lot of it.

While the average Roman living in the city relied on the many fountains spilling out fresh water, the wealthy had fresh water ‘on tap’ at home – water for drinking, cooking, bathing, flushing, washing, and even for fountains.

Clearly, they were big on wellbeing and a bit partial to the tinkle of water…

And I can’t argue with that.