Take a walk on the wild side…in Central Park

There may have been flash flooding in New York City last night, but today the sun is out in full force – and so are the people. Everywhere.

Definitely time to escape the seething sidewalks and get back to nature in Central Park.

Yep, there are a lot of people here too, but it’s not as frenetic (well, except for the joggers and cyclists and power walkers).

If you want a break from the touristy stuff and the crowds, head to the northern end of the park where there’s a little more breathing space and plenty of wild creatures out and about.

Which suits me, since I am a certified freak for nature! Here’s a sneak peak at the wild side of the city…

This clever American Robin built a nest right over the path about two feet above eye level – but nobody (except us) looked up. 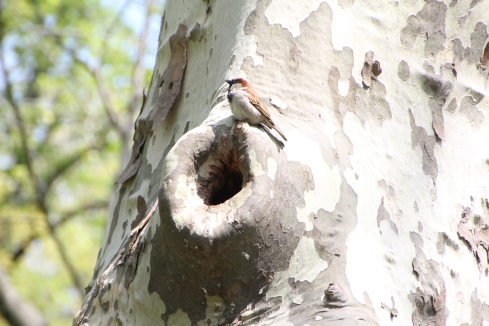 And after all that action, it’s time for some R&R…

In a New York state of mind…

After about 20 hours of flying time we arrived in New York City feeling pretty seedy. But with our hotel in the middle of the Theater District, and only metres from Times Square, our plan to get some rest before we hit the streets was soon discarded. After all, this is a city that never sleeps – and we’re in a New York state of mind.

Times Square is a pulsating neon hub in Midtown Manhattan. It’s hard to miss – and hard to move through. It’s jammed with tourists trying to get the perfect snaps, NYPD keeping the peace, and Elmo and other movie characters angling in for random hugs.

We wandered a few city blocks to the Pongsri Thai Restaurant on 48th Street for something fresh and spicy after all that airline food – and by the time we’d finished the surprisingly hot (hot!) food we realised just how tired we were.

But clearly still operating on Aussie time, we were both up at dawn and EB was itching to get going. Faced with two powerful life forces – New York energy and the Energiser Bunny (EB) – I gave in, strapped on my walking shoes and off we went.

What started out as a stroll to the Museum of Modern Art (MoMA) turned into an epic journey almost the entire length of Fifth Avenue, through Central Park, and into the Guggenheim instead. I know, I know. Why am I surprised when I’m travelling with EB?

Spring is finally here and New Yorkers (and lots of squirrels and birds) are out in force lapping up the delicious sunshine in Central Park.

The Guggenheim is a ‘monument to moderism’ with its spiral ramp rising up to a domed skylight. It was designed by Frank Lloyd Wright late in his career and only opened to the public in October 1959, six months after his death.

After five hours of walking, we finally stopped at the Morrell Wine Bar and Cafe in the Rockefeller Plaza for a well-earned and delicious lunch, surrounded by posh ladies lunching after their Fifth Avenue spending sprees and business people unwinding over a few drinks.

Time to wander back along Fifth Avenue to our hotel, to rest our feet for more nighttime adventures and birthday celebrations for EB… I suspect I’ll need a holiday (or at least a few Thai foot massages) when I get back to the land of Oz.