Give my regards to Broadway…

You can’t stay in New York without seeing at least one Broadway – or Off Broadway – show. But what is Broadway and what isn’t?

I thought ‘Off’ Broadway referred to something on the fringes of the district or more experimental. But it’s nothing quite as dramatic. I’ve discovered that it actually all comes down to the seating capacity of the theatre. 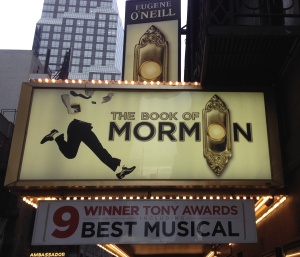 Our first show was The Book of Mormon – and what a baptism of hilarity on Broadway that was.

I hadn’t read any reviews, just picked it from a list of shows before coming here, purely based on its religious flavour and those outrageous SouthPark guys who created it.

From the opening ding-dong ditty, throughout this magnificently layered, gaspingly clever musical, and to the end where you are lifted to your feet – these guys have (ahem) totally nailed it.

Next week, we’re seeing Cabaret. It won’t be as irreverent I’m sure, but we’re looking forward to it. This stuff is pretty addictive – and, hey, when on Broadway…!

...wrapping words around travel, business, life and writing adventures. END_OF_DOCUMENT_TOKEN_TO_BE_REPLACED
This entry was posted on Friday, May 9th, 2014 at 1:12 pm and tagged with Broadway, Broadway show, Cabaret, Musicals, New York, NYC, Off-Broadway, Religion, The Book of Mormon, travel, vacation and posted in New York, Travel, Uncategorized. You can follow any responses to this entry through the RSS 2.0 feed.
« Walking the (high) line
Remembering 9/11… »

2 responses to “Give my regards to Broadway…”