Postcard from the Dolomites

Legends of the mountain. Apparently.

If you’re going to learn to ski, you may as well start at the top. In the fabulous Italian Dolomites, that is.

EB had never been on the slopes before (ones with snow on them anyway) so back in 2000 we took our first ski trip together – to La Villa in the valley of Alta Badia.

We went with Skiare Ski Tours and it was the best decision we made. Thomas, who owns and operates Skiare with wife Debbie, easily spotted us Aussies at the airport.

The clue: I wasn’t wearing stilettos and skin tight jeans for the flight, he said.

By the time we’d been skiing for six days under the expert instruction of Thomas, Macca and others, we were carving up the slopes… and sometimes spectacularly crashing out, usually when attempting jumps (more like bumps actually).

On our last day there, we even took on a black run. With plenty of enthusiasm and sub-zero style of course.

The following year I managed to pop my ACL in New Zealand, and haven’t been back on the slopes since.

But my sista and bro-in-law are skiing at Silver Star Mountain in Canada right now, so the itch is starting up again.

Ah yes, the call of the Dolomites (and delicious prune schnapps) is getting louder…

A room with a view… at the Gran Risa, in the gorgeous village of La Villa.

…with the gondola to the ski slopes right at the back door. (Hard to take, I know) 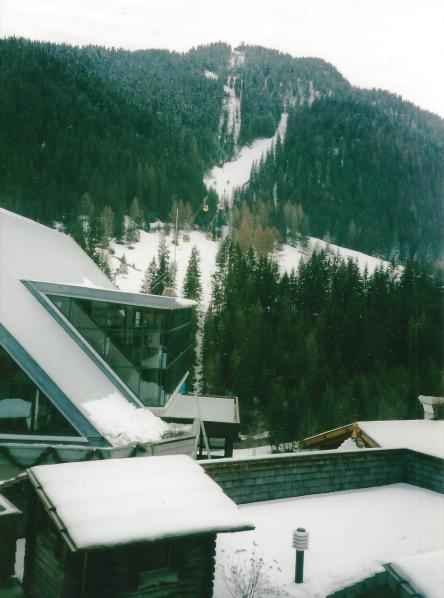 …and a perfect view of the World Cup black run from our hotel window. Chilled bliss right there.

...wrapping words around travel, business, life and writing adventures. END_OF_DOCUMENT_TOKEN_TO_BE_REPLACED
This entry was posted on Thursday, March 10th, 2016 at 10:56 am and tagged with Alta Badia, Dolomites, La Villa, Ski trip, Skiare, skiing, travel, vacation and posted in Italy, skiing, Uncategorized. You can follow any responses to this entry through the RSS 2.0 feed.
« Take an art break… at Tweed Regional Gallery
Port Arthur then and now… »