Getting into the Singapore swing… 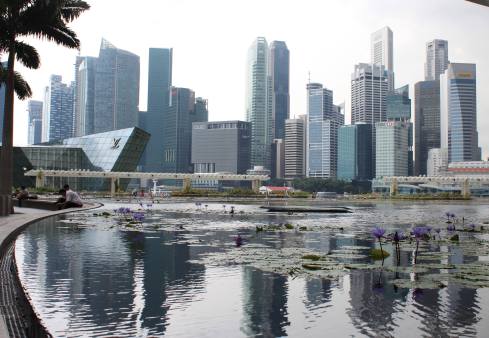 We’ve been hanging out in Singapore for the past few days. EB finds the humidity energizing. Moi? I’m suffering from serious France-lag.

Even my mobile kept French time for two days. Perhaps that’s why they call it a smart phone.

As always, we hit the streets on day one – stepping out into 33-degree heat, complete with 90 percent humidity. Joy.

One local just laughs at us and shakes his head. “Nobody walk in Singapore. Everyone take bus or taxi,” he says.

I wish. I already feel like I’ve run a marathon. Unfortunately, I look like it too. Wringing wet and half dead.

Which makes it hard to blend in along Orchard Road, Singapore’s posh shop-til-you-drop strip. The only person about to drop is me – and I haven’t even started shopping. 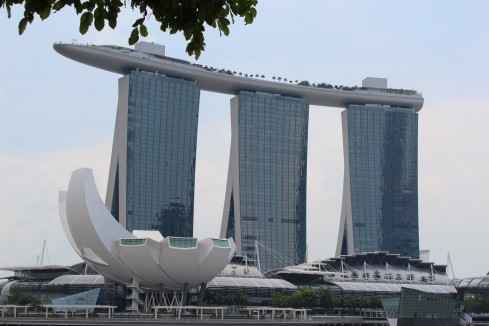 But what do the locals think of their city? “Singapore is fine city,” one lady says.

This isn’t a quirk of language. She’s not the first – or the last – to tell us about how highly regulated life is in Singapore.

There are fines for littering, fines for not emptying the overflow from pot-plant trays, fines and loss of taxi-licenses for drivers ripping people off, fines and jail terms for handbag snatching and other petty crime, a complicated car-ownership permit system, and more. You can even get the cane here, and not just at school.

The pot-plant thing? That’s about making sure mosquitoes can’t breed. It’s part of a vigilant program to stop dengue fever (check out the NEA ad).

All these strict laws may be annoying to live with, but they’re designed to create a litter and crime-free tropical city that’s healthy and safe for tourists and residents, with maximum green spaces and minimum pollution – especially car emissions.

And it works. It’s the safest, cleanest, most relaxing Asian city we’ve been in so far.

It’s also one the most environmentally-responsible and innovative cities in the world.

For us, it’s been a pleasant surprise and we’ve had a great time exploring the city.

Not always on foot. EB relented and we did eventually take taxis and buses – sometimes.

Coming soon! Some of our favourite places in Singapore. Until then, here’s a trip down memory lane – by bike.

This reminds me of how I felt on the last downhill run into Tournus. Nice. 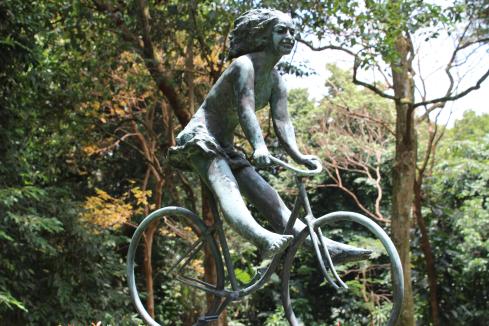 ...wrapping words around travel, business, life and writing adventures. END_OF_DOCUMENT_TOKEN_TO_BE_REPLACED
This entry was posted on Sunday, October 21st, 2012 at 9:56 am and tagged with Singapore, travel, vacation and posted in France, Singapore, Travel, Uncategorized. You can follow any responses to this entry through the RSS 2.0 feed.
« Au revoir, merci France
Wildlife adventures in Singapore »

One response to “Getting into the Singapore swing…”