Totally wild in the Camargue. Perhaps.

Imagine… wild white horses galloping through the wetlands, pink flamingos taking flight at sunset, slender black bulls with upright horns lifting their heads to snort and observe you, against a backdrop of deep blue.

October 3: Of course the Camargue was at the top of my list for places to see in France. I love wetlands and wildlife, and this promised to be 40,000 hectares of lakes and marshes teeming with life.

But Sylvia the GPS refused to cooperate. Je ne sais pas où c’est, désolé (she speaks French now), i.e. haven’t heard of it or words to that effect.

Y’know, there are times when you should see the signs and not just look for them.

The Camargue is a big place and there are two sides. Clearly, we chose the wrong one.

First we saw the saltworks that have been operating since ancient times. Between March and September each year, 15,000 tons of crystals are gathered each day, and washed and stored in salt mountains called camelles. 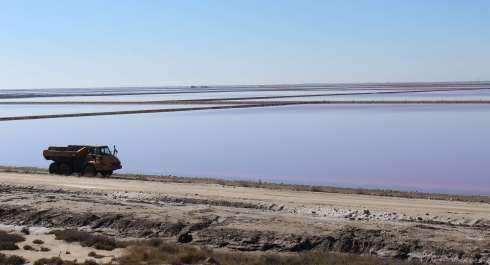 Then we saw random beach camping that, along with burnt-out caravans and other debris, would scare away anything wild (except the locals).

So, wildlife. Um. You couldn’t stop to look and you couldn’t really walk through it. What you can do, apparently, is park up and go au-naturel.

Apart from wild pig footprints, we saw a few birds and one horse…

A helpful parcs officer told us we could drive around to the other side of the wetlands and we might see some bulls and horses.

Frankly darling, by that stage, we didn’t give a damn.

Instead, we headed off to the Arenes de Nimes, an impressive Roman arena that was the original (and harsh) reality entertainment complete with hunter-beast and beast-eats-prisoner warmups, followed by gladiator battles to the death.

These days, the humane version of bull-fighting is on the agenda, along with bull running. This is a bit of fun for the lads – unless they miss their footing when leaping out of the way of a feisty Camargue bull with those brutal horns…

And so the sun set on a challenging day in Provence. The only way is up, baby.

...wrapping words around travel, business, life and writing adventures. END_OF_DOCUMENT_TOKEN_TO_BE_REPLACED
This entry was posted on Friday, October 5th, 2012 at 8:54 am and tagged with the Camargue, vacation and posted in France, Provence, Travel, Uncategorized. You can follow any responses to this entry through the RSS 2.0 feed.
« A week in Provence
Wild and wonderful… »