A river somewhere: paddling the Dordogne

After three duck-weather days, the sun peeps out from behind the clouds this morning and gives us a wink and a nudge.

It’s a sign. We jump in the car and head to Couleurs Périgord, one of the 23 canoe hiring places along the Dordogne.*

They are open, and we’re soon on our way to our drop-off point in Carsac, 22 kilometres up-river.

Apparently there can be up to 6,000 canoes on the river on summer days.

The Dordogne is slightly wider than a four-lane carriageway, so I’m guessing it would feel a bit like a freeway at peak hour. Joy.

Today, the air has a distinct chill and the sun is weak so, for us, this is the best time to be on the river. We are alone out here, just the way we like it. 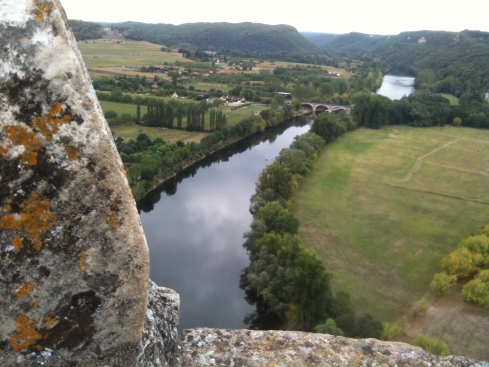 …the Dordogne from the Château féudal de Beynac

Like every hire kayak, this one is built tough. And heavy. It weighs at least 56 and a half kilos. Well, maybe not, but it moves like a slug and we’re happy we’re going with the flow…

We paddle past delightful stone villages and under bridges, past castles high on the cliffs, and chateaux nestled in amongst the trees.

The river is flanked by lush green forests, splashed with Autumn reds and golds. The water is so clear, we can see fish of all shapes and sizes darting beneath us.

Every now and then, we catch a flash of cobalt blue as a tiny kingfisher swoops down from the trees to snatch les poissons du jour.

The trip is supposed to take four hours, but that doesn’t account for the outboard motor in the back of our kayak. That’s EB, who has no off-button.

So two-and-a-half hours later, we round the last bend of the Dordogne to face the incredible view of Beynac and the Château féudal de Beynac towering above it.

Yesterday, we were up there looking out across the valley (pictured). The river view is so much more impressive.

Ahead, between our landing place and us, is a small flock of rather large ducks. More like a gaggle of geese.

These things are enormous, and stretch out to appear even bigger when they spot two dangerous and slightly soggy intruders.

Three of them swim towards us, necks outstretched, furious and protective of their young. The leader opens his bright orange beak and lets out a powerful hiss.

There’s no giving them a wide berth. They paddle faster than us, especially when we’re laughing too hard to paddle at all.

Luckily their hiss is worse than their bite, and a couple of waving paddles keeps them at bay until they’re satisfied they’ve put the fear of le canards in us.

It’s times like this I wish had a waterproof camera. Damn.

At the end of our paddle, we are slightly chilled but ridiculously happy – and we feel one of those leisurely people-watching afternoons in a Sarlat café coming on.

As soon as we peel ourselves out of these wet clothes…

...wrapping words around travel, business, life and writing adventures. END_OF_DOCUMENT_TOKEN_TO_BE_REPLACED
This entry was posted on Friday, September 28th, 2012 at 3:12 pm and tagged with chateau, Dordogne, kayaking, vacation and posted in Dordogne, France, Travel, Uncategorized. You can follow any responses to this entry through the RSS 2.0 feed.
« Fortress, castle, rock… playing up in Dordogne
When in France… »